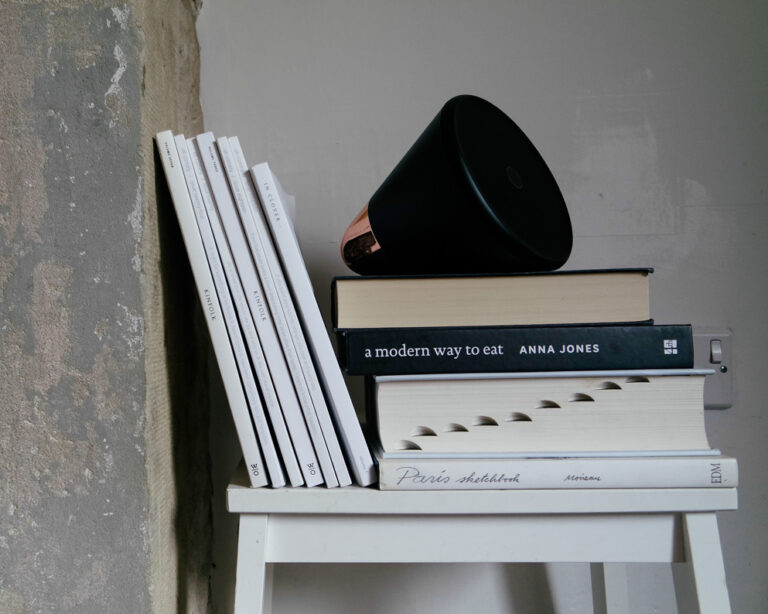 Her name’s Matilda & we’ve had her for years, outside. She’s had two coop-mates, and outlived them both, and since then she’s just sort of decided that we are her remaining flock. It seems cruel to correct her, really.

So she waits on the doorstep at dusk, tucking her head under a wing & snoozing if we’re late home & darkness falls. She pushes her way in ahead of us all as we open the door, striding into the kitchen to peck up breakfast crumbs & stray strings of Orla’s spaghetti. She’ll spend a while doing her feathers – far longer than I ever seem to spend doing my hair – then take a drink from the cat’s water bowl and head to bed. The cats’ bed, as it happens, but they’re too stunned to object.

Visitors are less easily silenced. ‘THE EAGLE IS COMING!‘ wails my friend’s 5 year old, as she eyes his toast hungrily by his feet. We quietly push her out the door.

In the day, she wanders the village, digging up the neighbours plants and laying eggs in their sheds & flowerbeds. She has an outdoor house with a pen, but if I lock her in, she shouts – shouts & shouts a crazy chicken shout – so I do what any sane person would do; I buy a chicken nappy on etsy, and let her in.

Photos of me by my dear, dear friend Ali Dover.

What’s a good wordpress blog theme for an icanhascheeseburer or failblog clone?

I discovered your wonderful blog this weekend via IG and have been working my way through your posts and this one is the best so far! ‘The Eagle is coming’, and ‘chicken nappy’ 🙂 x

This is the most wonderful story. Chickens are just so sweet, and definitely misunderstood in the grand scheme of things.

She’s a real character, that’s sure and she makes me want to raise roosters even more… hopefully one day…

Hehe, I love that you have a feathered friend who kinda seems to rule the roost a little bit! x

Haha thanks Emory! I don’t always feel like I have a lot of choice tbh! 😉

Thanks Amanda! It’s a lot of fun 😉

Hahahaha she’s almost as funny as her mummy! Poor Eme. At least she knows what a shouting chicken sounds like now. Not many 2 year olds can say that! 😉

A goat! A Pygmy goat! Please get one so I can live vicariously through you 😀
We saved and dreamed of this for a long time – I feel like I spent my whole life dreaming of it, in fact! It’s worth the wait, promise x

Oh do it, do it! You honestly won’t regret it one bit. Fresh eggs in the morning and the funniest, sweetest of pets 🙂

The nappy is a bit of a nightmare tbh. She takes it off like a Houdini chicken or similar. But yes, caecal poops outside only!! Ugh!

This is hilarious! Good on you for listening to a chicken’s wants and needs. 🙂

This is amazing!! making saving up for a move to the country with children, chickens (and a goat?!) even more exciting!

I’ve been wanting to get chickens for some time now…we have room in our backyard for a coop. How adorable – and a chicken nappy?! Who knew!! Love.

I absolutely adore your dress. And your chicken. Hope the chicken nappy is working out alright. Does she do those horrible early morning poos outside? x

Yes!! I would never have guessed just how clever they can be; Matilda has always been incredibly bright. She outwits the dog & the cats all the time!
Hope you get your own little flock someday! x

😀 chickens in the new bin shed?

Thanks Hannah! It is, I’ll admit, slightly less brilliant when you stand in a warm chicken poop barefoot…. x

I love this so much. My parents had chickens and they were real characters, if mum was late with their food they would come and knock on the door and shout at her! I long for chickens…

This is fab! Hello chicken!